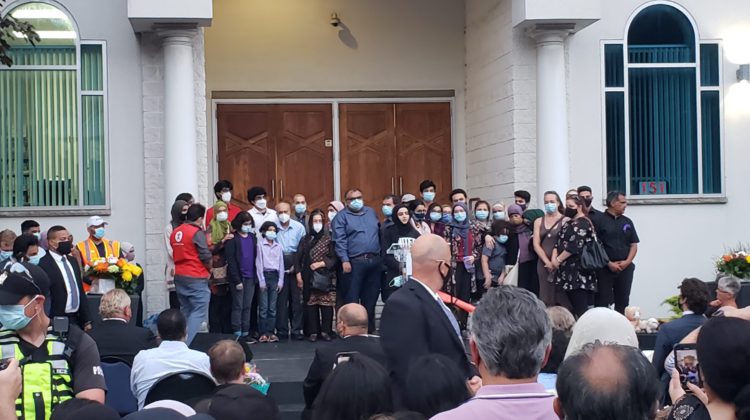 Photo of All friends and families of the victims, first responders at the event as well as dignitaries and representatives of the many groups that reached out after the tragic event as well as Yasmeen Khan, a close family friend of the deceased. - Phot taken by Vista Staff

Thousands gathered around the front steps of the London Muslim Mosque Tuesday night to grieve the loss of the Afzaal family. 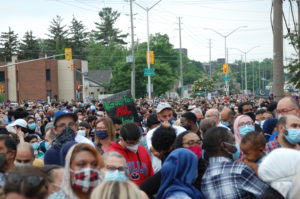 Image of the crowd in at6tendance at the Vigil held Tuesday night for the victims of the fatal attack. (Taken by Vista Staff)

Salman Afzaal, his wife Madiha, their daughter Yumna and Salman’s mother were killed Sunday in what police said was an intentional attack targeting them for their faith.

The only surviving member of the attack, 9-year-old Fayez is said to be in stable condition after being treated in hospital.

Leaders from all government levels came and spoke at the vigil where they all classified the attack as an act of terrorism and called for an end to Islamophobia.

Organizer Nusaiba Al-Azem, second vice-chair of the London Muslim Mosque said she herself has walked the same trail the London family took Sunday and never got to finish.

“There are no words that can ease the grief of having three generations murdered in their neighbourhood,” said Prime Minister Justin Trudeau.

NDP Leader Jagmeet Singh carried a message to children who may be worried they might look too Muslim if they wear a hijab.

“We will not cower in fear, we will wear a turban or a hijab with pride because we are proud of who we are. We will not let terror win,” he said. 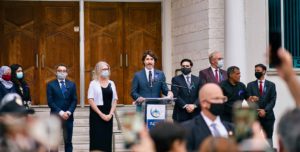 Prime Minister Justin Trudeau with members of his cabinet at the vigil in London,ON Tuesday night. (Photo taken by Moses Latigo Opong)

Ontario Premier Doug Ford said “Right now, this evening there’s a nine-year-old boy in the hospital who’s lost his parents, his grandmother and his fifteen-year-old sister. We are told Fayaz Will survive the injuries he sustained and we can only thank God for that but Fayaz has suffered a tragedy that we can’t even begin to consider,”

Ford called the attack an act of terrorism against a family targeted for their beliefs and for their religion vowing that this type of racism and terrorism cannot and will not be tolerated.

And then at around 8 PM, the same time the Afzaal family was robbed of three generations two days prior, a moment of silence was held in remembrance.

A Muslim Londoner in attendance at the vigil said she felt overwhelmed and still very frustrated after the speeches.

The sentiments, she said, are appreciated but there comes a time where the condolences end and actions begin.