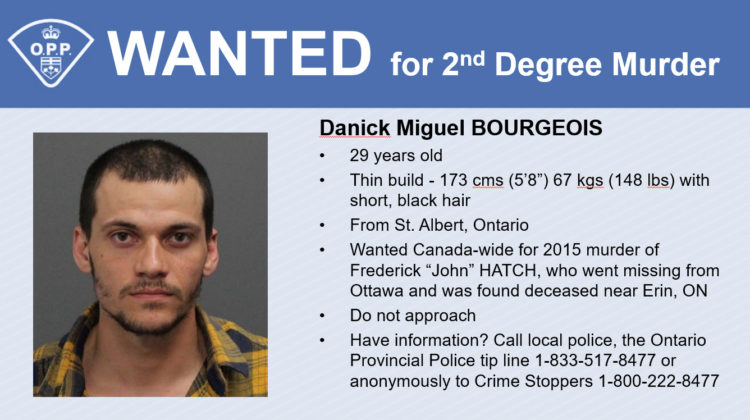 A Canada-wide warrant has been issued for the arrest of Danick Miguel Bourgeois, for the murder of Frederick “John” HATCH about five years ago.

The OPP says it now has a warrant for the arrest of the 29-year-old originally from St. Albert, Ontario who is charged with Second Degree Murder and is urged to surrender to the nearest police service immediately.

Hatch was last seen alive on the afternoon of December 16, 2015, in the area of West Hunt Club Road and Merivale Road in Nepean. 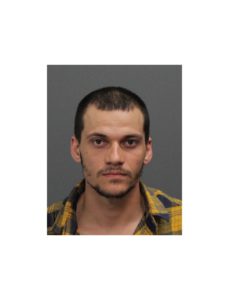 Photo of Bourgeois provided by the Ontario Provincial Police

His body was discovered 450 kilometres away near the Town of Erin, Ontario, in the early morning of December 17, 2015.

A $50,000 reward remains in effect for information leading to the arrest and conviction of the person(s) responsible for the murder of Frederick “John” HATCH.

Anyone knowing the whereabouts of Danick Miguel Bourgeois(Photo of the wanted individual to the left) is urged to;

If anyone sees Bourgeois, police say do not approach him directly and call your local police service.

Can you help locate this individual, wanted in the 2015 #murder of Frederick John Hatch? Victim last seen alive in #Ottawa & located deceased near Erin, south of @orangevilleont. DO NOT APPROACH suspect. Please call with any info. @OPP_CR @OPP_WR @OttawaPolice @RCMPONT #ottnews pic.twitter.com/na5GT836JV