Community pitches in on beautification 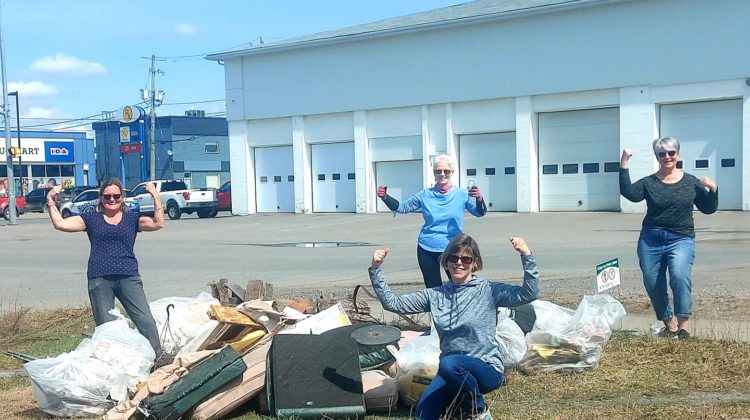 Diane Mekers-Laferriere, Dianne Theresa Lacourciere, Evelyn Knupfer and Valerie Buckle-Lariviere are just some of the few volunteers who have pitched-in and kept our community clean this spring. (Photo supplied by Sturgeon Falls Beautification Group Facebook page)

West Nipissing has been getting a facelift for the last few years but none so much as we’ve seen this spring.

That’s once again thanks to Gayle Primeau. Primeau has been responsible for nearly two dozen murals going up across West Nipissing over the last few years. She also leads her beautification group, as well as weekly clean-ups during the summer months.

Primeau sent out a challenge to the community to adopt an area, trail, park, street or neighbourhood and keep it litter-free all season. Once a clean-up is done, folks can put their Pitch-In / Tim Hortons bags at the curb for regular pick up on garbage day.

“Within a week, I had over 100 locations accounted for,” said Primeau. “When I got all the bags in and piled them in my garage I thought ‘omg what if I can’t get rid of all these bags?’ and I’m already down to my last box.”

Over 125 locations have currently been “adopted”.

Primeau says she’s been spending anywhere between four to eight hours a day on her phone over the last few weeks, posting all of the pictures and tallying all of the litter.

“Between that, recording everything, putting bags out, making lists of garbage… it’s been busy. In the end, the goal is not only to have a clean and beautiful West Nipissing but to have some stats to bring to council. I think certain things need to change around here and I believe there’s too much litter. Especially in our outlying areas. I am floored at the amount of litter and alcohol bottles in our woods. Something needs to be done,” said Primeau.

She hopes the many pictures, and community-wide effort will help eradicate the garbage problem in West Nipissing.

“I go for walks at night and I see areas that I knew at one point had a lot of litter, and they’re now cleaned up. I feel immense pride. I’m very proud that people are getting involved like they are. Everything is in investment. It’s an investment in our town; in our lakes, our rivers, our community. That’s how I see it,” she said.

Primeau and her beautification group can be found on Facebook. There, you can ask any questions or even adopt an area of your own. You can also view the dozens of garbage bags residents have been filling up on a daily basis.