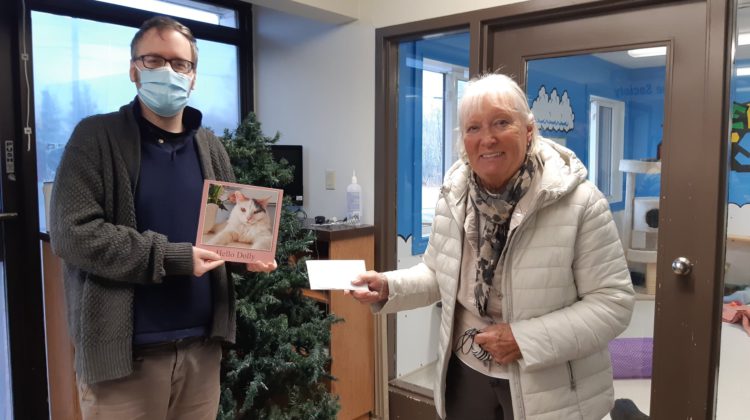 When Barb Weeks was shuttered in her Callander home in the early stages of the COVID-19 pandemic alongside her cat, she figured she’d put the time to use.

Weeks is the author of the children’s book, Hello Dolly, which is now on sale through the North Bay Humane Society (NBHS).

Four years after her husband passed away, Weeks responded to an online ad to adopt her cat, Dolly.

“For a while, I was having trouble taking care of me,” she said. “There was an emptiness I felt a fur baby would fill.”

Dolly came from what Weeks calls an “unfortunate situation” where the cat lived with a large dog and spent the majority of her time hiding. Dolly is a Manx cat with “unique markings” and no tail which is common for the breed.

When Weeks brought Dolly home, the impact was immediate.

“I think it was day one when I realized this was the thing missing in my life,” she recalled.

After adopting Dolly in August of 2019, Weeks began snapping regular pictures of the cat’s hijinks around her home, often finding her in unusual spaces.

“She makes me laugh every day and she’s got personality,” Weeks observed.

When the pandemic hit, Weeks began assembling the pictures into a book, which she eventually accompanied with a story that was written from Dolly’s point of view.

The book follows Dolly as she becomes acclimated to a new home after getting adopted. The overall message of the book, however, hits home for Weeks.

“When you rescue an animal, they really rescue you,” she said.

After selling a handful of books to close friends, Weeks donated the proceeds to the Humane Society, also providing them with her unsold copies.

Brett Greene, Manager of Fundraising and Fund Development for the NBHS says he encounters a lot of stories like Weeks’.

“As much as we are vested in caring for dogs and cats, we tend to also see the human side of things,” Greene explained. “When we have people like Barb thinking of us, it’s a great motivating factor for us. As you can imagine, we deal with dogs and cats who don’t speak so they can’t give us feedback to get a sense of whether we’re doing something good or not.”

For the holiday season, copies of Hello Dolly are available for sale through the Humane Society for $20, with all proceeds staying within the community. Greene says he will contact Weeks if more books need to be published.

Weeks is a retired English teacher, making her foray into writing relatively easy. She says as the pandemic continues, a sequel to Hello Dolly is being considered.

“With her being without a tail, I was thinking about the theme being ‘the tale of the tail’,” she teased.