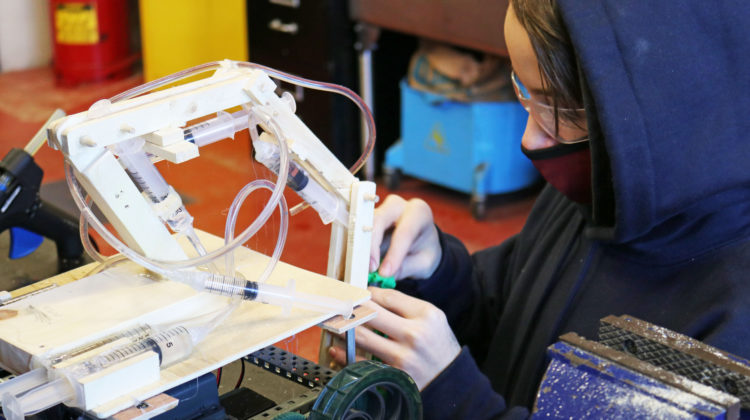 (Supplied by Near North District School Board)

Grade 9 students at Northern Secondary School have been hard at work building robots this year.

Technology teacher, Kevin Baker, and media studies teacher, Carmen O’Brien, have worked together to create learning that provides a transferable skillset that students use in both classes thus making for an easy transition from one class to the next in a mode of extended learning.

In Baker’s class, students are introduced to electrical, woodworking, and hydraulics while they construct a fully operational robot to pick masks up off of the floor.

“We are learning the basics of hydraulics with wooden arms. The task is to pick-up masks from the ground and of course, no one wants to pick them up with their hands, so we are building a robot,” stated Alex, who noted that there was a lot of planning, designing, building, and learning by trial and error. “I’m very satisfied with the completed project.”

Students design their robot to be a combination of a VEX Robotics, electrically driven chassis with a wooden, hydraulic arm mounted on top. The remote-controlled robot is designed to pick up an unused mask from the floor.

“They get to tinker, they get to solve problems on the fly. That’s what is so important about tech programs in high-school. At this level, they have the foundations of basic courses like science, math, English, geography… the beauty of tech is, it makes it all come alive,” added Baker.

Baker says that tech shows real-world applications of skills students have learned in other classes.

“They have to measure, they have to calculate, they have to present reports and communicate design ideas and how they function… and then when it comes to science and physics, well that touches everything too. That’s what makes my day so enjoyable. I’m provided real-world experiences for these students,” he said.

A few doors down, students in O’Brien’s class learn how to program robots from scratch using programming blocks in the EV3 LEGO programming software.

“Students have learned how to program robots, how to use three different sensors; touch, ultrasonic, and colour sensors,” explained O’Brien. “They’ve used those sensors to detect objects that are in front of the robot and programmed the robot accordingly so that it can move autonomously through either a maze or through the First Lego League mission board, and accomplish different missions at the same time.”

The First Lego League board was used in years past during the school’s Robotics Club, but due to COVID-19, the club isn’t happening this year.

Baker does say that it will be back as soon as it’s safe to do so.

“The robotics competitions are so huge and so well put together. The kids love it and it’s a great way for them to take ownership of their accomplishments. I think it’s great and we’ll be continuing to enter teams when we can do so again safely,” finished Baker.