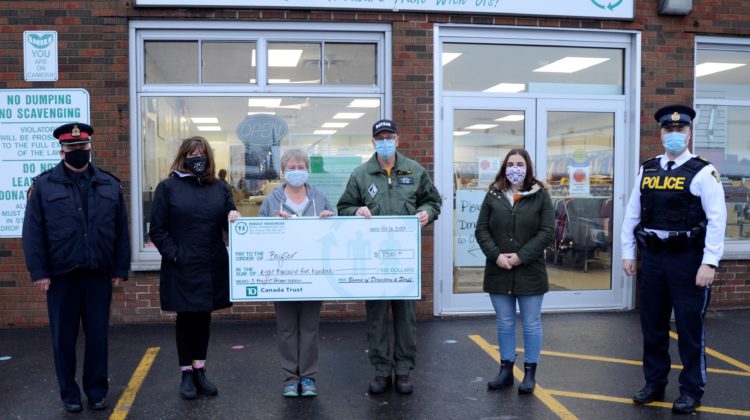 Weeks after it was unveiled to the public, Project Lifesaver has received donations to expand its service that helps locate missing persons quicker.

BAYSAR Search and Rescue partnered with the North Bay Police Service, One Kids Place and the Alzheimer’s Society to roll out a service providing people with cognitive impairments with a transmitter that can easily be tracked through a specialized radio frequency should they wander off.

BAYSAR has announced a collective donation of over $12,000 has been made to expand the service to OPP detachments in North Bay, Sturgeon Falls and Mattawa.

Stan French, President of BAYSAR says he was in the process of putting out fundraising letters to local community organizations when he learned of the generous donation.

$8,500 has been donated by Maureen Brazeau through Rebuilt Resources, which will primarily be for purchasing a radio receiver for the North Bay OPP detachment. Collective donations from local construction companies made up another $4,000, which will go toward Sturgeon Falls’ and Mattawa’s detachments.

French says the added money will allow the service to be rolled out in North Bay’s surrounding communities relatively soon.

“We have enough transmitters right now when we’re operational and the police are fully trained, we can expand into that area,” French said, figuring North Bay OPP can use the service by Christmas, with the other detachments slated for early in the new year.

At the time of the original announcement, French said that he would need about $9,000 to expand Project Lifesaver to the surrounding OPP detachments.

With the extra funds, French says the availability of the service can expand as they will have “a little extra in the pot”.

“It means that if we use up all the existing transmitters, we can quickly expand and buy more transmitters,” he stated.

Project Lifesaver is largely used by families of people with dementia, Alzheimer’s or autism who are at risk of wandering off, resulting in missing persons reports.

“Not only can it help save a life because we can find these people much quicker and easier, it provides peace of mind for the family,” French explains.  “This is like their insurance policy. Knowing that the onus isn’t 100 percent on them if something happens and their loved one goes missing.”

To get involved in Project Lifesaver, contact BAYSAR, One Kids Place or the Alzheimer’s Society.