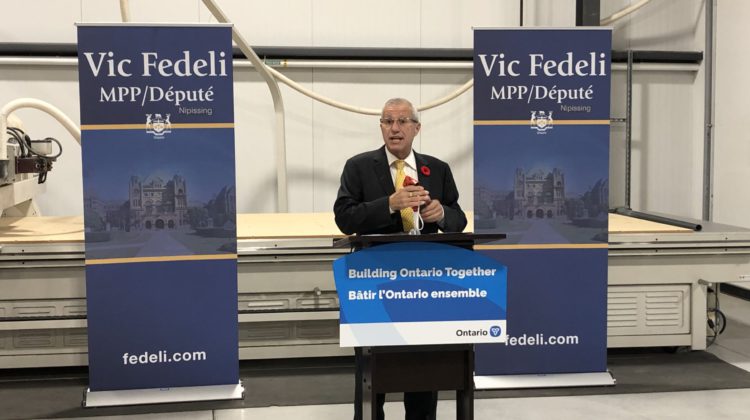 Nipissing MPP Vic Fedeli at a facility at the Airport Industrial Park announcing over $1.4 million being invested into the area's manufacturing sector, creating 17 jobs. (Photo by Greg Bowman, MyWestNipissingNow staff)

17 new manufacturing jobs will be coming to the area thanks to a $1.4 million provincial investment.

At the Airport Industrial Park on Monday, Nipissing MPP Vic Fedeli announced the funding which is coming through the Northern Ontario Heritage Fund Corporation (NOHFC).

“The NOHFC program has been a perfect catalyst for many businesses in the past. We’ve brought tens of millions of dollars and those companies are all employing people and they’ve held up through COVID,” he told the media at the announcement.

The $1.4 million worth of investments include:

Michael Valenti, General Manager of Designed Roofing says that the investment will help his company “fast-track” its move into its new facility at the Airport Industrial Park.

The Airport Industrial Park began as an idea that Fedeli had while he was still mayor of the city over 10 years ago. Now, there is just one open lot left for sale in the area near the North Bay Jack Garland Airport.

“Council now has to turn their mind to opening up more serviceable industrial land,” North Bay Mayor, Al McDonald said at the announcement.

Last month, Metso Minerals Manufacturing announced that it is closing its North Bay site, putting about 65 people out of a job. McDonald says that the city is focusing on balancing out any manufacturing job losses by bringing more employment to the area.

“We have to make sure that we’re bringing in more capital than we’re losing with the companies,” McDonald said. “We’re having great success, there’s a lot of great things happening, but we do lose those companies like Metso which is so unfortunate for those families. We’re doing everything we can to create even more jobs so there’s opportunities there for them.”