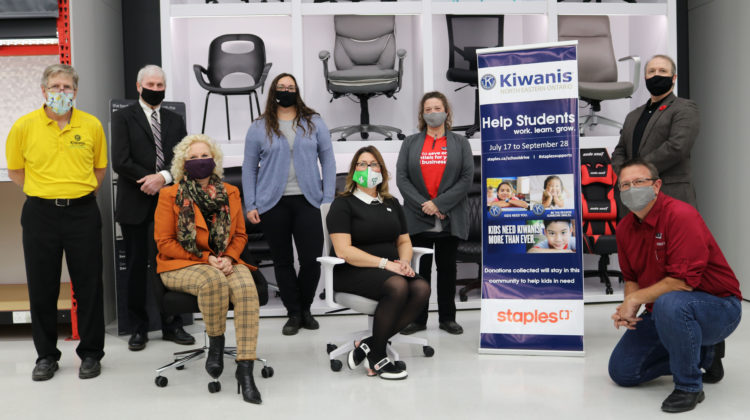 As part of a national campaign, the Kiwanis Club of Northeastern Ontario and Staples in North Bay partnered to raise money for school supplies from July until September.

As a result, the four area school boards and Nbisiing Secondary School all received gift cards worth over $1,000 to purchase school supplies.

Ralph Celentano, President-elect of the Northeastern Ontario Kiwanis Club is glad that he was able to raise some money during a time where it is difficult.

“Raising funds has been a challenge during the pandemic as many groups and organizations understand. This was a wonderful opportunity to give back to the community in such a neat way,” Celentano said.

The $5,300 in funds raised over the summer were equally split between the five parties, totalling $1,060 each.

Last week, Celentano and members from Staples delivered the gift cards to each of the recipients, who were all appreciative of the extra support.

“It was wonderful to witness the purpose to which each of the school boards had for the funds,” he said.

“This will be a lovely opportunity for the school boards to engage these students with some necessary supplies where they would frequently have resources available in the building,” he noted.

In Central Ontario the North Bay Staples came in fourth in fundraising behind Aurora, Bolton, and Collingwood.

Across Ontario, over $514,000 was raised by Kiwanis Clubs and Staples stores which went to children in communities across the province.

Celentano says that he had one goal in mind while he was helping out in the campaign from July until September.

“In the end, I wanted to know that we could do something good for the kids,” he finished.