Hike from Home for Hospice aims to bring families together 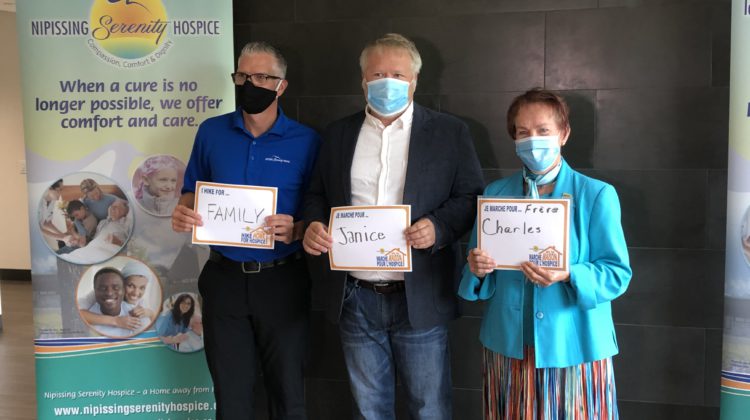 This year’s virtual event will be held on Thanksgiving weekend, October 10-12. The goal is for people to sign up by themselves or in teams, raise money over the next month and then perform the ‘hike’ from their home alongside their families.

Gil Pharand, Executive Director of Nipissing Serenity Hospice, says that the virtual hike doesn’t even need to be a hike or walk.

Bernadette Lindsay, Fund Development Coordinator for the hospice centre says that the fundraiser goes beyond the limits of North Bay.

“This region has always been so supportive and generous.  The Hospice serves people from West Nipissing to Mattawa, from Temagami to Burks Falls and East Parry Sound.  We truly are regional,” said Lindsay.  “Hike from Home for Hospice can be done from anywhere in our region, at any time, with anyone.  We encourage you to hike with family, your bubble or a virtual team.”

Dean Decaire, a local accountant who is a donor to the hospice, says that he plans on engaging with business leaders in the community to support this year’s event.

“Over the coming days, I will absolutely be sending out an email to many of my clients and my fellow business colleagues and community leaders to get involved with this Hike for Hospice. I will share my experience with them as to what it was,” he explains.

Decaire’s mother had spent time at the hospice in July of this year before she passed away. He says that the facility’s care was something that he cherishes.

“There were periods of time when my mom was not conscious. But yet I would come in, one of the healthcare practitioners would be sitting with her holding her hand. I shed a lot of tears over two weeks,” he recalls.

Pharand says that Decaire’s outreach will be valuable in drawing more attention to the fundraising campaign.

“We receive so much support from the region. North Bay and this region is always giving. For Dean to make that challenge and to have other business leaders step up,” “It really is about making a difference in our community,” Pharand says.

He adds that the money raised during this year’s fundraiser will be put back into the facility.

“Services at the hospice are free. People are not charged for anything. So this support is very important.

The hospice’s facility on John St. was opened in January of 2020, serving 50 people so far this year.

Participants are urged to sign up for the Hike from Home for Hospice at www.nipissingserenityhospice.ca/hike