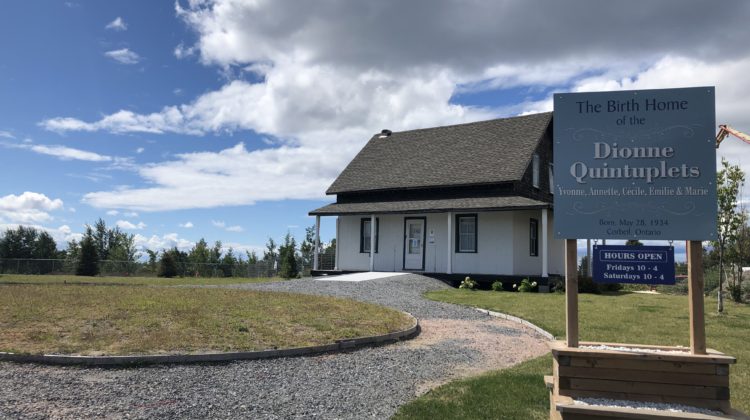 The house of the Dionne Quintuplets on Oak St. in North Bay is building an interpretive garden which has received a surprise $20,000 in provincial funding. (Photo by Greg Bowman, MyNorthBayNow Staff)

The Dionne Quintuplets Heritage Board has received a spontaneous $20,000 in funding from the provincial government to help in the construction of an interpretive garden.

Ed Valenti, Chair of the Dionne Quints Heritage Board, says the news was a surprise.

“We were completely caught off guard. We always recognize that whenever you go for funding, there’s always a lengthy process,” Valenti explained.

Lisa MacLeod, Minister of Heritage, Sport, Tourism, and Culture was taken for a tour of the Dionne Quintuplets museum prior to her making an announcement on funds for the city’s tourism and cultural sectors.

After the tour, she and Valenti were discussing the interpretive garden project that the Dionne Quintuplets museum had to put on hold because of the pandemic.

MacLeod asked how much money the museum needed to complete the project. Valenti responded that they needed about $20,000.

“She invited us to the museum for the presentation and when we got there, we were informed that $20,000 had been secured for us,” Valenti recalls.

MacLeod says that she acted quickly to secure provincial funding for the museum.

“From the time I walked from the museum, I called the ministry to make sure that we could support that garden and ensure the interpretive garden get built,” an emotional MacLeod said, choked up after what she had seen on her tour of the Quintuplets Museum.

Valenti says that the interactive garden was proposed when the museum moved to its current location near the North Bay Museum. The first phase of the plan included planting five trees to represent each of the quintuplets. The second phase was to lay down interlocking stones and create a garden in front of the museum for people to visit at all times of the day.

The museum planned to delay the second phase of construction, but Valenti says that it can resume with the new funds.

The Dionne Quintuplets were five identical sisters born in Corbeil, Ontario in 1934. During the challenges of the Great Depression, people from across the globe flocked to the area to see Yvonne, Annette, Cécile, Émilie, and Marie. The phenomenon brought a significant amount of traffic to the area and is credited for pulling North Bay out of the Depression.

“It put North Bay on the map. If there’s one thing that you can point to in our history. It’s the single event that changed the whole area. During the Depression, everyone was working in the area. It was something that brought a lot to the city,” Valenti said.

The Quintuplets story also has a negative side, with the Ontario Government taking full custody of the daughters, turning them into a tourist attraction.

When asked about why she chose to act so quickly to help out the Dionne Quint Museum, Lisa MacLeod’s answer was simple.