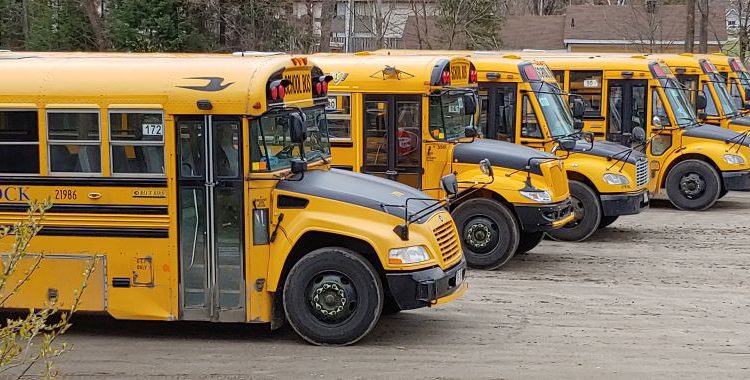 Students will have to wear face masks on the school bus this year, but bus capacity will not be reduced by the transportation service.(Stu Campaigne, MyWestNipissingNow.com staff)

The Nipissing Parry Sound Student Transportation Service (NPSSTS) says that they are not going to reduce the number of students on one bus this year as plans for student transportation are beginning to take shape.

Chuck Seguin, Executive Director of the NPSSTS says that school buses fall under the public transportation guidelines set out by the North Bay Parry Sound District Health Unit, meaning that masks will be mandatory.

“At this point, the number of students on the buses is our normal loading with the masking that is mandated by the health unit – where physical distancing is not possible, masking is required,” he said.

Seguin says that the upcoming school year’s transportation plans have been in the works since schools were closed at the beginning of the pandemic. He says that transportation boards across the province have been collaborating with the Ministry of Education.

“It’s been critical over the past couple of months to provide information to the Ministry (of Education) about what student transportation challenges could be,” Seguin said. “Although from area to area, things will be different.”

Seguin says that some challenges include the safety and health of drivers, students, PPE, as well as social distancing.

The NPSSTS issued a letter to parents of the area’s four school boards (English public, English Catholic, French public, French Catholic) urging them to complete a questionnaire that has been made available to determine how families intend on getting their children to school by bus.

Seguin says that the input is crucial for the NPSSTS’ development of its transportation strategy.

“We want to release to parents the information as complete and as precise a format as possible and getting that data as to who’s in and who’s out, adjusting our route times as soon as possible is important to us,” he said. “We know that parents and families plan around the pick-up time in the morning.”

Seguin says that the transportation board anticipates some families to opt-out of sending their child on the bus, which they are hoping will reduce the number of children on the vehicle. He adds that if parents do choose to opt-out of bussing, they can still opt back in later in the year.

While the NPSSTS is trying to get feedback from parents, Seguin says that the drivers have also expressed some concerns.

“Many of [the drivers] are in the vulnerable sector of the population. These are part-time jobs for them and there are risks attached to any employment right now,” he explained. “The bright side to that, in our area, we’ve enjoyed a low level of infections. […] Drivers are apprehensive about it and that’s why we’re letting them know that we do look out for their best interests.”

The NPSSTS has 11,000 riders on its buses, with some routes taking up to 70 minutes depending on the location. Seguin says that the geographical challenges are also being considered.

“Students are on the bus for a good portion of their school day. We try to be as efficient and effective as possible in preparing those routes and keeping ride times down to a minimum. But we do cover a vast geographic area and that’s why Nipissing-Parry Sound (NPSSTS) in its transportation plan may vary from another jurisdiction,” he said.

Seguin adds that the board is also working on implementing measures to ensure students follow the new bus rules, saying that there will be communication between the drivers, school, and parents.

Students are set to return to class on September 8.