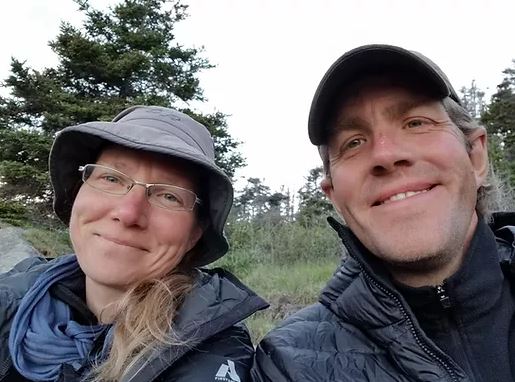 Sonya Richmond (left) and her husband Sean Morton (right) are in the midst of a 24,000 km hike across Canada to promote reconnecting with the outdoors. (Photo supplied by comewalkwithus.online)

Last year, married couple Sonya Richmond and Sean Morton decided to quit their jobs, sell their possessions and embark on a three-year, 24,000 km hike along the Great Canadian Trail.

Dr. Richmond, who previously worked as an Ornithology Researcher and contributor to the Provincial Bird Atlases, says that her and Morton’s goal is simple.

“We’re hoping to inspire people of all ages, cultural backgrounds, genders, ability levels, identities, just to get outside and reconnect with nature. We’re trying to do that through birding and citizen science,” said Richmond.

As for the inspiration for the long trek, Richmond says that it came while she and Morton were travelling in Europe.

“While we were over there, a lot of people said ‘you’re from Canada, it’s one of the most beautiful places on Earth. You’ve got all this wilderness… why aren’t you walking across Canada?’ So we kind of decided to take up that challenge and see what we can learn about our own country,” she explained.

On June 1st, 2019, the two began their journey in Cape Spear, Newfoundland – the easternmost part of Canada. From then until November, they walked over 3,300 km, making it to Quebec before taking the winter months off.

This spring, the couple planned to pick up where they left off in Quebec, but the pandemic did not allow them to travel outside of the province. Instead, they started the 2020 leg of their journey in Ottawa on May 20.

They two passed through the West Nipissing area over the August long weekend.

Richmond says she and Morton were pleasantly surprised by the difference of culture they’ve seen while in the North.

“We’ve really enjoyed seeing the French culture in this region. Coming from Southwestern Ontario, I didn’t realize there’s still this sort of legacy of French explorers. Up here, you see it on the signs and you hear people speaking French… that was really exciting,” she said, adding that the Mayor of Mattawa, Dean Backer, made a point of meeting them.

Richmond and Morton have both been hiking and camping for most of their lives. She says that plenty of prior hikes and trips with her husband have made this journey easier.

“We did do those longer treks together to make sure that we can hike together because that’s not a small thing. If you have a different pace, or just have a different approach to it you can really get on each other’s nerves but we’re a really good fit,” she explained, adding that the trek took about a year to plan before they started.

Through the entirety of the journey, Morton and Richmond have had their backpacks full of whatever supplies they can carry.

“Our heaviest stuff is actually camera gear and our electronics because we’re trying to document the whole thing and share it with people. Basically, we have our tent, sleeping bag, sleeping pads, we have a tiny little stove, one cooking pot, two cups, food, water, and two sets of clothes,” Richmond said.

The longest the two have gone without seeing any civilization has been seven consecutive days. As for food, Richmond says that she and her husband have been almost exclusively eating oatmeal for breakfast and rice and beans for dinner with granola bars in between, citing that they are the lightest foods to carry.

During the trip, the two have been taking pictures and blogging after every day of hiking.

Richmond says that they have even had a few people join them on the trails.

“We’ve actually met up with quite a few groups who have gone out of their way to join us in a physically distanced and responsible way,” she said.

Richmond and Morton have travelled over 1,500 km in 2020 so far. By 2022, they hope to make it to Victoria BC, then north to Tuktoyaktuk, Northwest Territories.

The Great Canadian Trail connects nearly all of Canada through greenways, waterways, and roadways, spanning over 27,000 km across the provinces and territories.

You can view their journey on their website, or blog site: https://www.comewalkwithus.online/