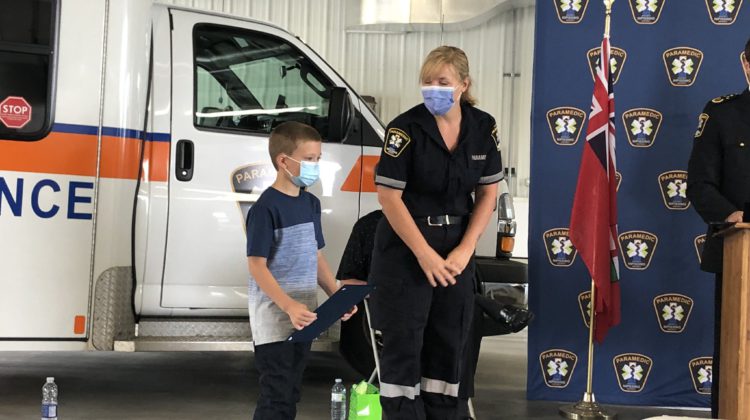 The Nipissing District Paramedic Service (NDPS) doled out numerous recognitions today to both first responders as well as a young boy for two life-saving incidents that happened only months apart.

Just over a month later, David Oley took his grandson, Trent Hare, out for a fishing trip. While on the water, Oley began feeling weak and lethargic. David and Trent were able to get the boat back to shore where the 9-year-old called his mother who called 911. While waiting for paramedics to arrive, Hare ran between the road and his grandfather trying to flag down someone for help.

“My grandpa told me to go out to the road and get the ambulance. So I sat there for a couple of hours, someone came by, I tried getting them to stop, and they didn’t stop. And then an hour and a half later, the ambulance came,” said Hare, who was honoured with a recognition of bravery and a toy ambulance from the NDPS.

David Oley is amazed by his grandson’s composure in a difficult situation.

“He was incredible. He went up from the boat to the truck, got the cell phone, and came back down. Constantly checked on me and even put water on my head when it was warm…He just took it all in stride,” Oley recalls from the incident.

Oley and Hare were in a remote location where cell phone service was inconsistent. David’s wife, Carol, says that she told her husband to teach Trent how to use his flip phone anyway.

“Luckily when they got to the yard, he taught Trent how to use [his phone] and he put it in the glove box and that’s where it was when Trent needed it,” said Carol.

Miranda Grainger was one of the paramedics who arrived to meet the young boy and was also impressed with what she saw from Hare.

“He looked really happy to see us, of course. We were surprised that he was such a young boy… He was very stoic, he was very composed and we just asked him right away where his grandpa was…he took us down to the push and showed us where he was,” Grainger recalls at the ceremony where she was also recognized.

Trent has been honoured by North Bay OPP, taking him for a tour in a patrol boat a few weeks ago. The NDPS continued the recognition with a ceremony at its headquarters, honouring Hare, Margaret Skinner, and all the first responders from both of David Oley’s incidents.

Stephen Merkley, Paramedic Chief and Manager of NDPS, says that Oley’s family’s story is one worth sharing.

“It’s so important, especially for paramedics to get a cardiac arrest saved and for somebody to walk out of the hospital – it’s a fairly rare occasion. It means the world that Mr. Oley was here today to recognize them,” Merkley said after the ceremony.

Merkley also wants to use Trent’s heroic’s as an example for parents.

“Teaching [children] their address, their phone number, obviously the number for 911 but also what to do in an emergency situation… He certainly answered the call. He was beyond calm. There’s no way we would have found Mr. Oley as quickly as we did without him,” said Merkley.
Carol Oley wants to use her family’s stories as an example of how basic emergency preparedness can make a difference.

“I can’t stress enough how important it is to have a CPR course so that you don’t have to stand by and watch a loved one die because you don’t know how to help,” Oley said in a previous statement. During her husband’s heart attack in March, Carol performed chest compressions until Margaret Skinner came to help.

With two medical emergencies in such close proximity, Carol also says that she has a new appreciation for life.