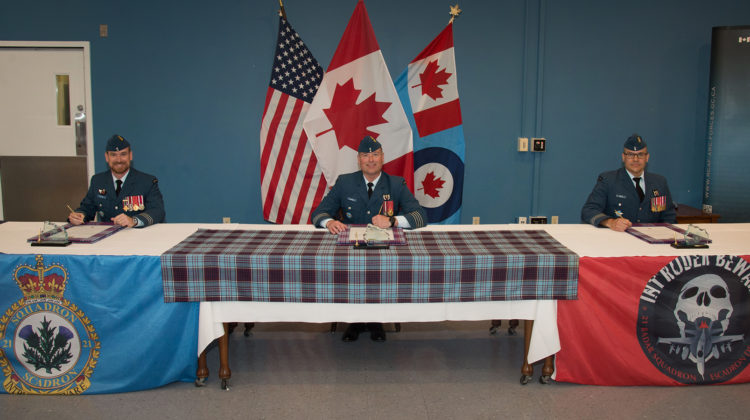 Officials say LCol Oldford first enlisted with the Canadian Armed Forces in 1994, bringing 26 years of experience to the role of commanding officer. He has participated in Operation ATHENA in Afghanistan in 2010, and was deployed to operation FOUNDATION to the US Combined Air and Space Operations Centre at Al Udeid Air Base in Qatar as the Deputy Director, Combat Operations Division.

“Lieutenant-Colonel Jolette’s strong leadership and guidance have ensured the modernization of our capability to execute the NORAD mission, whereby safeguarding Canadian and North American aerospace,” said Colonel Mark Lachapelle, the commander of 22 Wing/CFB North Bay. “The Royal Canadian Air Force is proud of your service, and Canada owes you a debt of gratitude. I am excited to welcome Lieutenant-Colonel Oldford back to 22 Wing and I’m confident he will continue the tradition of excellence at 21 Sqn.”

“I am both honoured and truly humbled to have the opportunity to return to 22 Wing as the 21 Aerospace Control & Warning Squadron (21 AC&W Sqn) Commanding Officer,” said Oldford. As I assume my new responsibilities with the support of my family, Honorory Colonel Moore, all of the members of 21 AC&W Sqn and 22 Wing, I am aware of both the challenge and importance of our mission. I am looking forward to working with each and every one of you over the next few years. And I say to our foe…INTRUDER BEWARE!’’

“I am truly honoured to have worked with the members of 22 Wing and specifically 21 AC&W Sqn, which has been the highlight of my career,” Jollette stated. “I will miss being part of the truly warm and welcoming community of North Bay. I wish Joe the very best as he leads the dedicated and talented members of the best squadron in the RCAF, 21 AC&W Sqn! INTRUDER BEWARE.”

“I wish Richard every success preparing for his new post in Ottawa as the Executive Assistant to the Chief of the Defence Staff,” said Honorary Colonel Corina Moore. “It has been a pleasure to work with Richard, even for such a short time, as Honorary Colonel. He is a natural and invaluable leader.”