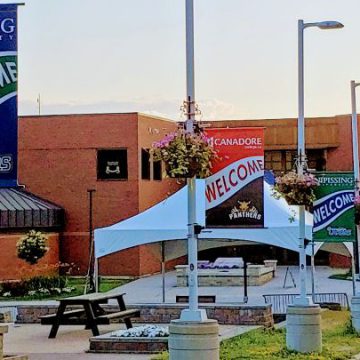 Nipissing University has announced the newest members to be given honorary degrees.

University officials say Nipissing will bestow the degrees to:

The University says Patrick Dion is a leading government relations professional, recognized for helping clients solve strategic issues and enhancing their reputation and brand with federal, provincial and municipal governments.

For Penny McIntyre, officials say she is a Senior Executive and international business leader with extensive experience living and working abroad at premier consumer packaged goods companies including Newell Rubbermaid, The Coca-Cola Company, and S.C. Johnson.

Joan McLeod Shabogesic is described as a proud Nbisiing Anishinaabe-kwe. She held the position of Land Manager for Nipissing Nation for 37 years. Ms. McLeod Shabogesic was instrumental in the settlement of three land claims that not only increased Nipissing’s landholdings, but also established lucrative settlement trusts.

Officials say Jerry O’Connell was born and raised in New York City, began his acting career at age 11 when he co-starred as Vern Tessio in the classic Rob Reiner film “Stand by Me”. He has also starred as the titular character in the TV series “Carter” that was filmed in North Bay.

Lastly, the University described Scott Russell as a Canadian Screen Award and Gemini Award-winning broadcaster and acclaimed author who brings vast experience, passion and knowledge to his role as one of the hosts of CBC Sports’ Road to the Olympic Games.

“Convocation is an important occasion that honours the accomplishments of Nipissing University students,” said Dr. Mike DeGagné, President and Vice-Chancellor, Nipissing University. “Although convocation will look different this year, we are thrilled to have these exceptional individuals celebrate with our students by accepting honorary degrees and addressing the graduates that have worked so hard for this moment.”

“The chosen honorees have made significant contributions to Nipissing University, their profession, and society at large, and we are proud to welcome them to the Nipissing community,” Dr. DeGagné added.

The group of six will receive their degrees during the universities virtual convocation on June 26. The graduation will begin at 8:30 a.m. and will be available online later as well.

As part of the celebration, the university says it has partnered with the City of North Bay to recognize the Class of 2020. North Bay Mayor Al McDonald will proclaim June 26 “Nipissing University Day” in a video address, the Nipissing University flag will be raised at City Hall, and signage on City busses and at Memorial Gardens will celebrate this year’s graduates.

This group joins past Nipissing University honourees such as: