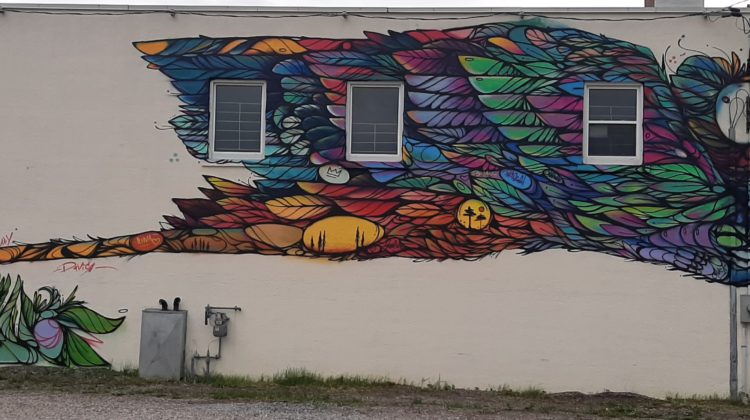 Mique Michelle decided the time was right to add a new mural to the downtown area of Sturgeon Falls.

Originally from Field, Michelle has painted murals around the world, but was in the area to visit her family. As a result of her homecoming, the side of the West Nipissing Tribune building now shows off her artwork, a big blue heron that takes up much of the side of the building.

“I might have exaggerated a bit on the colours,” she said while laughing. “I have an artistic licence. I had to put all the colours in there like the glare of the sun and the reflection of the lake hitting it, and it’s already a beautiful bird.”

Michelle says the mural went up in just two days, over the weekend, and was made in collaboration with Art Studio and Gayle Primeau, the leader of the Sturgeon Falls Beautification Group. An anonymous donor helped fund the project.

“We were hoping to give it a blast of colour because we’re facing a lot of challenges during these times,” Michelle said. “We lost some strong pillars of our community and we wanted to put their names up and keep a reminder of how colourful and how they contributed to our lives. The bird is a little bit of all of that.”