OSSTF President to education workers: ‘You are the heroes’ 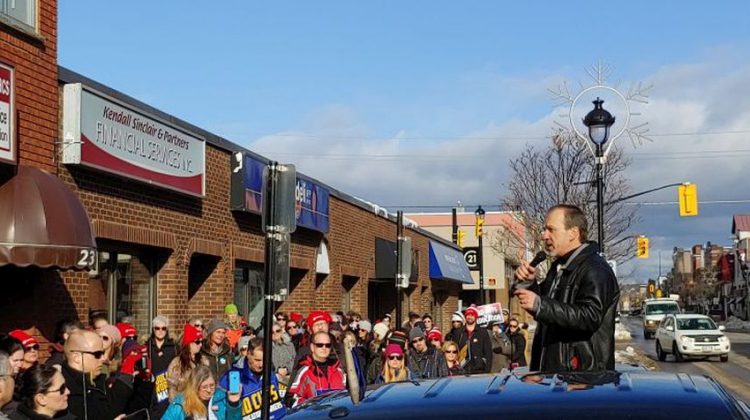 At a picket line outside Nipissing MPP Vic Fedeli’s office Thursday, the assembled teachers and education support staff were told by the head of their union it was not a time to back down in the labour impasse.

“I’ve never seen the public rally behind education workers and behind the whole education system the way that they have done,” Ontario Secondary School Teachers’ Federation President Harvey Bischof announced to the crowd.

“This government that has attacked our students, attacked quality of education and now, partly goes back to where they need to be, now wants to pretend they are the heroes in defending public education. Wrong. You are the heroes!”

Bischof rallied the members, saying, “You are the ones who provide kids with the opportunity for equity in our publicly-funded education system.”

Meanwhile, during Question Period at Queen’s Park Thursday, Premier Doug Ford delivered a message to the education unions: “The party is over with the taxpayers’ money, pack your bags and get back into the classroom.”

“I have offered all teachers’ union federations a fair and reasonable plan, which should pave the way to reaching a good deal that keeps students in class.

“The government has consistently made reasonable moves – effectively freezing classroom sizes, a parental opt-out for online learning, a commitment to full-day kindergarten, and one hundred per cent investment in special education.

“The time for a deal is now, I urge the unions to stop this disruptive escalation and return to the table to get a deal that is fair for parents, students, and educators.”

See All local students off Thursday; Lecce calls on unions to cancel strikes

Asked about the legitimacy of the Lecce press conference, Bischof responded, “For this minister to claim that he’s made proposals at the table is more spin and deception.”

Hodgson added, “There was certainly some initial optimism when you saw the minister doing the press conference but it quickly became clear to my members there was not any kind of deal made at the table and it wasn’t actually through negotiations.”

All classes were cancelled in the area Thursday as the Ontario English Catholic Teachers’ Association (OECTA) and the Association des enseignantes et des enseignants franco-ontarien (AEFO) participated in strikes province-wide. Local members of the OSSTF took part in a selected rotating strike targeting the Near North District School Board.