Educators fighting for their ‘kids’ — and also their kids 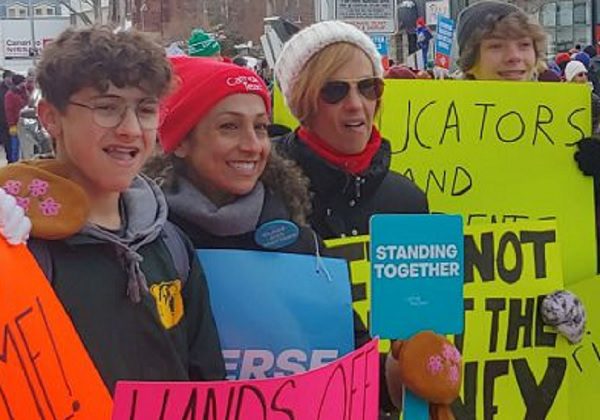 Over the sounds of hundreds of picketing education workers on Main Street East in North Bay Friday morning, occasional teacher Kristi Johnson-McKay explained her stance on the strike.

Kyller McKay, Kristi’s son and a ninth-grade student at Saint Joseph – Scollard Hall attended the strike action outside MPP Vic Fedeli’s office with a crew of friends, all with homemade signs in hand.

Kyller explained he would rather spend the day off school supporting his family and teachers. “It’s really important to stick up for our teachers and our schools. It’s for us, the teachers are doing it for us.”

A beaming Johnson-McKay said, “It makes me feel extremely proud, both as a mother and as an educator,” to see Kyller and his friends in attendance. “It’s invigorating to see so much support out here.”

Kyller said he comes from a long line of teachers in his family and they have taught him to stand up for what he believes in. “In my English class last semester, there were 31 of us in a class. And then, they split it up and it was amazing the difference.”

Kyller added funding for schools is another concern of his. “We already don’t have a lot of funds going to the arts department and it would be a lot better if they didn’t cut our funds and give it to the new licence plates that aren’t readable.”

Asked which of the sticking points in the labour negotiations most affects her work as a supply teacher, without hesitation Johnson-McKay answered, “If I could pick one thing, it would be [more] support in the classrooms for those children who have special needs. The exceptional students.”

She concluded, “The majority of our behaviours that are happening in the classrooms, the violence that is happening in the classrooms, the amount of classrooms that are being evacuated because children are having meltdowns is because the teacher is not able to get to them because there are too many students. And, we need the support of EAs [educational assistants], mental health support, special education and all that is being cut. There are way too many kids in our classrooms.

Premier Ford calls job numbers a “punch in the gut”