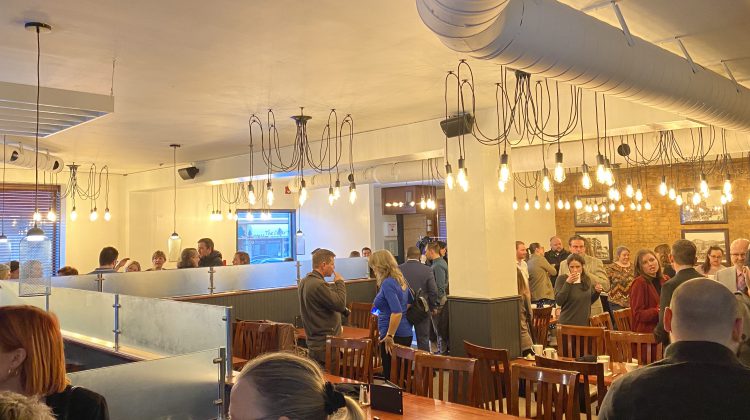 Participants gather at Cecil's for the launch of #FiftyTwoCoffees. (Kortney Kenney MyWestNipissingNow.com staff)

The second edition of #FiftyTwoCoffees kicked off Thursday morning at Cecil’s Brewhouse and Kitchen downtown.

Bobby Ray, the program coordinator, said after the first running of the program, there have been some slight tweaks to make it more accessible.

“What’s new this year compared to last year is all ages are invited,” Ray said. “I think there is a great opportunity, not only for young to get to know each other because they will be the future business partners, but to learn from more experienced people as well. There’s so much wealth of information out there and the more experienced business professionals, and they want to give back.”

“They want to past along what worked and what hasn’t and share where the community can go, together,” he continued.

Ray calls it a “league for one on one coffee meetings”.

“It’s almost business dating,” he explained. “We send people out and we tell you what week you have to meet but it’s completely within your flexibility to decide what day, where and for a how long. Some people have met for 20 minutes, some met for three hours. You set it up on your own schedule, but we monitor the progress and make sure everyone is staying on task.”

Another addition this year is various meeting options. Previously, it was a weekly meeting, now participants can choose between weekly, bi-weekly and monthly sit-downs. Meetings also do not have to be involving coffee as the title would suggest.

The idea first came to Ray’s head in 2013 when going down the rabbit hole known as the internet. There he stumbled upon Megan Gebhart’s story from when she graduated college and challenged herself to have a cup of coffee with someone different each week.

That story spawned last year’s #FiftyTwoCoffees which featured 84 participants. That number has grown to 120 for 2020 with over 1,500 meetings already being assigned. Even at that number, Ray says they are still welcoming newcomers.

“You can contact the North Bay and District Chamber of Commerce or you can find the Chamber or Young Professionals committee on Facebook,” Ray said. “We send you a link with a registration form. As the schedule is sort of already made, we are adding people to a substitution list, but we are also talking about starting up another group for them.”