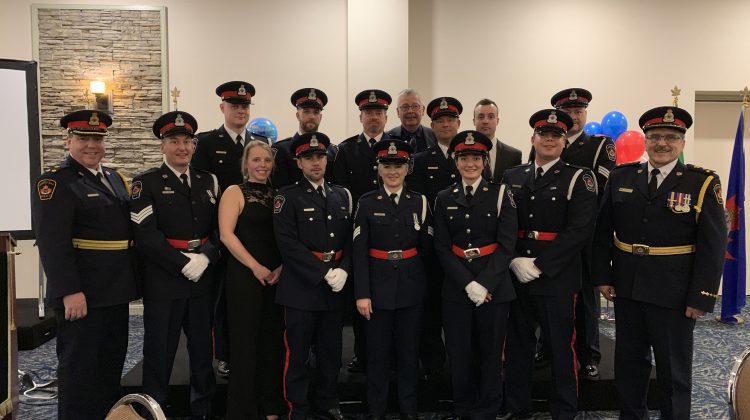 Recipients of the North Bay annual Awards ceremony. The officers and personnel are flanked by Police Chief Scott Tod on the far right and Deputy Chief Michael Daze on the far left. (Rocco Frangione, MyWestNipissingNow.com staff)

North Bay police officers, civilian staff and retired police personnel were honoured for their work and dedication at an awards ceremony.

One of the officers was Constable Jason Long who received the North Bay Police Service Board Certificate of Commendation for his work on helping to break a child exploitation ring.

International law enforcement agencies had learned that the administrator of an online child pornography site was a resident of North Bay.

Long investigated the matter and with help from other police departments the site was dismantled and two people are now serving 35-year prison terms in the United States.

Police Chief Scott Tod says because of Long’s dedication, his work and the work of police departments in Australia, the U.S. and Canada police were able to make one of the largest seizures of child abuse material in North America. 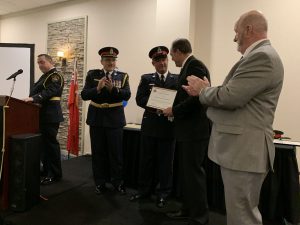 “It was incredible to have North Bay involved in an investigation and recognized (internationally) for the efforts of our members,” Tod said.

“It shows the world if I can say that, how good and how well we police North Bay.”

One reason is “it breeds encouragement and service excellence for our people”.

Tod says the awards also show the public “some of the great things that we’ve done that are unreported or unknown to many people”.

The police chief also says the awards ceremony lets the public see how heroically and courageously some of the officers behave in the course of carrying out their duties.

That’s certainly the case with two police officers who waded into Lake Nipissing last October after a man ran into the lake following a vehicle collision.

The man refused repeated requests to return to shore and instead continued swimming further out into the lake until emergency personnel lost sight of him.

It was then that Detective Constable Pemberton and Constable Robertson entered the frigid waters in an attempt to find the man.

The officers continued to look for the individual until they could feel the cold taking hold of them and gave up the search before hypothermia set in.

The officers risked their own safety to rescue a person and for that, both are recipients of the North Bay Police Service Board Award of Merit.

Another instance of police putting themselves in harm’s way occurred in December 2015 when three officers entered a building not knowing what to expect including if the person inside was armed.

This case also saw a fire deliberately set to keep emergency responders out.

But Constable Dagg put out the fire then he and Constables Fay and Brear found the man and arrested him.

A woman involved in the matter died as a result of her injuries.

All three officers were given Certificates of Commendation.

Brear received a second Certificate of Commendation as did three other officers for their role in a shooting during December 2018.

The shooting resulted in one man being injured who later died as a result of his wounds.

Before he died, Brear and Constable Ransom carried the injured man to the ambulance while Constables McLeod and Gainforth provided cover from the armed man still in the building.

The officers put themselves in harm’s way in an effort to rescue the injured man and their efforts were recognized at the awards dinner.

Tod says it’s specific details like these that the public knows little about but the ceremony helps get the word out.

The awards event also recognized a number of personnel with 20, 30 and 40 years of service.

Additionally, the ceremony began with a special award to the police from Lynne Lavigne, the widow of Callander Mayor Hec Lavigne who died suddenly earlier this month in Sudbury. 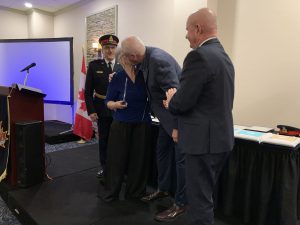 The former Mayor had been a long-time member of the police board and after his death, the Lavigne home was broken into while the family was in Sudbury.

The award, which is in Memory of Hec Lavigne, thanked the police department for their dedication to Callander and is also a thank you from the Lavigne family as it went through a difficult time.

Tod and former Police Chiefs Shawn Devine and Paul Cook accepted the award on behalf of the department.

Tod says the North Bay Police Service is small but “we are a mighty police service”.

“I describe it to my fellow police chiefs of Ontario as successfully small,” said Tod.

“We do a great job with our investigations.  We do a fantastic job of solving crimes.”