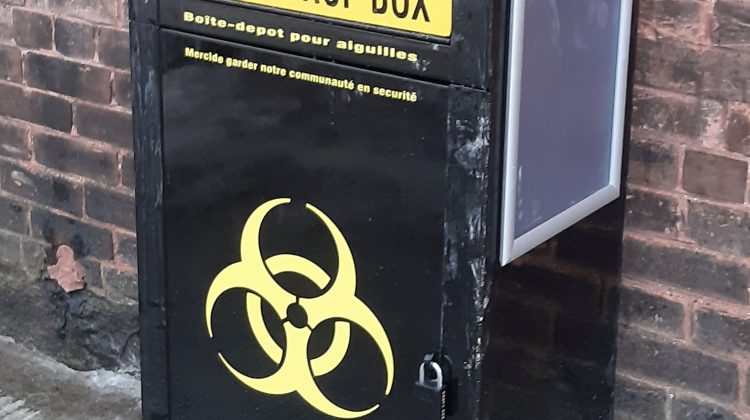 The dropbox for used needles is bolted to the cement sidewalk and is tamper and childproof (Drew Ferris, MyWestNipissingNow.com staff)

There’s now a bin in Sturgeon Falls for people to dispose of their used needles.

It’s located at the corner of Queen Street and Main Street.

The dropbox is the result of the collaborative effort of the Municipality of West Nipissing, the Alliance Centre at the West Nipissing General Hospital and the North Bay Parry Sound District Health Unit.

Mayor Joanne Savage says the drive to install the bin became apparent after she got many complaints about discarded needles.

“I’d been hearing from many residents how they found needles on the ground either at playgrounds or sidewalks,” said the Mayor.

Savage says a discussion began with the health unit and with help from the Alliance Centre placing the bin in downtown Sturgeon Falls became the solution.

Savage acknowledges the receptacle doesn’t resolve all the issues but it’s a start and adds “if we can save a life, then it’s worth it.”

That was followed by a presentation to council in the fall and eventually, an agreement was signed between all parties.

As for why the Main and Queen site was chosen, O’Connell said that was the result of holding a focus group with substance users and where they thought the best place for the dropbox should be.

The consensus was the chosen site and the decision was reinforced by the Alliance Centre which carried out a study that also found the Main and Queen streets region was the preferred area.

O’Connell says the municipality will maintain the bin and it will be emptied weekly at first ECS Cares to make sure it’s not full to the brim.

After a while, the municipality will re-evaluate the weekly pick-ups and O’Connell says it will readjust the removal schedule of the needles from the bin if necessary.

O’Connell also says once the used sharps are placed in the bin people don’t have to worry about them falling into public hands.

“The bin is tamper and childproof,” she said.

“It works like the large mailboxes all over in town.  Once you out the sharps in there, people can’t retrieve or take them out.”