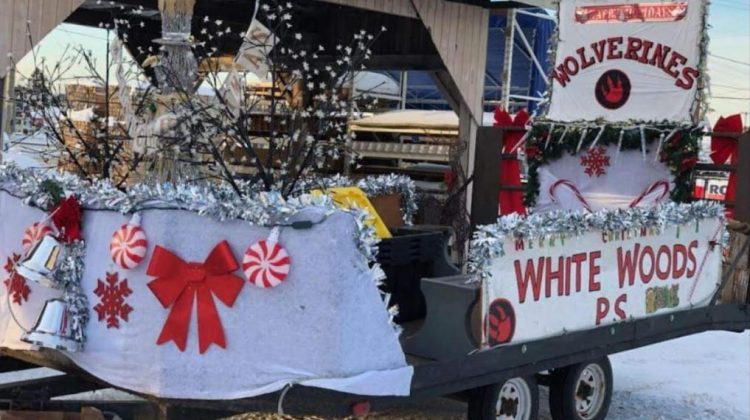 The Municipality of West Nipissing is all set with this Friday’s Parade of Lights.

And for the third year in a row, White Woods Public School will have its float in the parade helping the local food bank.

Teacher Erin Graham-Mitchell says the school’s Take Action team, which is made up of school members, is part of the float.

“We’ll have students and adults walking along with the float,” Graham-Mitchell said.

She adds the public has two options to help the school collect for the food bank.

“We’ll take monetary donations where students will have containers people can put money into,” said Graham-Mitchell.

“As well, if people want to have their non-perishable food items in bags that would be excellent and students and adults will go over and grab the bags from the people.”

Graham-Mitchell says the first year the Take Action team carried out the food bank drive with the Parade of Lights float, the public response “was fantastic”.

“But last year it dwindled a bit,” she said.

“Despite that, we had more than $600 in donations as well as several boxes of non-perishable food.”

Graham-Mitchell also says White Woods has been collecting food at the school for the last two weeks.

Graham-Mitchell says she’s very proud of the Take Action team because it’s a group of students and adults who are making a difference both locally and globally.

The Parade of Lights leaves the West Nipissing Community and Recreation Centre at 6:30pm.

To prepare for all the floats that need to be lined up, the municipality will be closing King Street from Highway 17 to John Street at 5:30pm.

The municipality is also asking residents not to park their vehicles along the parade route because that makes it tougher for the floats to get by and for the public to see the parade.

The following road closures are in effect during the parade.

Clark between John and King

John between Clark and Michaud

Michaud between John and Ethel

Ethel between Michaud and King

King between Ethel and Queen

Queen between King and Clark.

Once the parade has passed through the affected streets, each roadway will reopen.

There are 35 floats entered so far in the Parade of Lights.

The municipality says there’s still time to enter a float.

Groups that want to enter a float are asked to call 753-0160 so they can be registered.