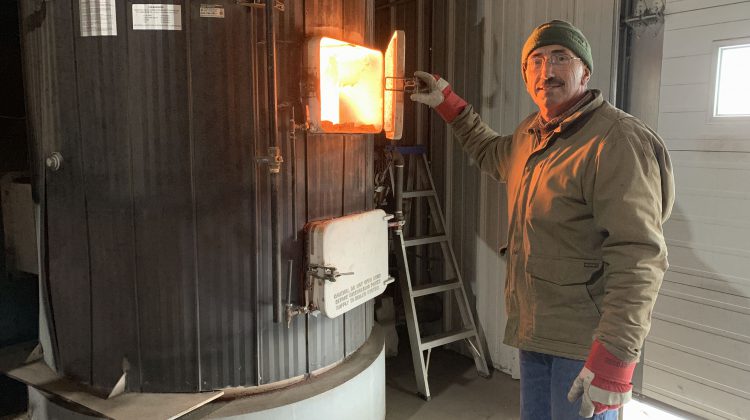 Peter Van Amelsfoort, manager of Quality Hardwoods in Powassan, by one of the boilers that supplies heat to the main warehouse and 10 kilns at the site. (Rocco Frangione, MyWestNipissingNow.com staff)

Expect Quality Hardwoods in Powassan to apply for funding under a new forestry program.

Manager Peter Van Amelsfoort says he will have to look into the newly announced program a little more but is confident it can help the wholesale hardwood company.

Quality Hardwoods was the site that Minister of Natural Resources and Forestry John Yakabuski picked on Friday to announce the $50-million, five-year Forest Sector Investment and Innovation Program.

Van Amelsfoort is confident the new program will help Quality Hardwoods when it comes to innovation.

He says energy has been a constant challenge for the company and several years ago the company began using biomass as a means to heat its main warehouse and 10 kilns.

The biomass switch to wood pellets dropped the energy costs substantially compared to oil which as Van Amelsfoort says “was killing us”.

Van Amelsfoort says oil was costing Quality Hardwoods about $400,000 to $500,000 a year and switching to biomass cut that bill in half.

There was also another benefit.

“We reduced our carbon footprint (significantly)” he said.

Van Amelsfoort says Quality Hardwoods wants to use the newly announced forestry initiative for its boilers.

He’s hopeful money from the program can make the company’s two boilers more compliant with the most recent changes in government regulations in addition to making them more efficient which will reduce costs even further.

The project involves continuous emissions monitoring of the boilers which involves monitoring the oxygen levels, heat, carbon dioxide and fuel.

It’s a project the company wants to undertake in the next six to eight months.

Quality Hardwoods used to employ more than 40 people before the 2008 recession.

Now it has 20 to 25 workers plus it helps create northern spinoff jobs like those in the wood pellet industry.

The company has been in business for almost 40 years.