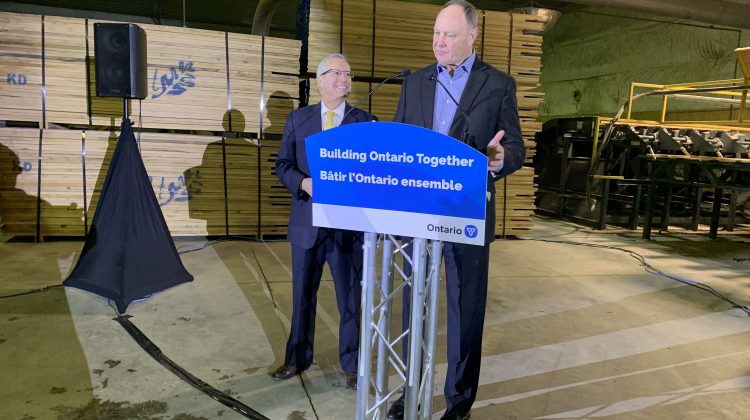 The Ontario government is making it easier for forestry companies to sustain and create new jobs in the future.

John Yakabuski, the Minister of Natural Resources and Forestry, was at Quality Hardwoods in Powassan Friday morning announcing a $50-million, five-year program.

The minister has reformatted the former Forestry Growth Fund and renamed it the Forest Sector Investment and Innovation Program (FSIIP).

Funding will be made available over five years at $10-million dollars a year.

Yakabuski says the program is now easier to apply for and it puts more emphasis on the impact the project will have on the local region.

In making the announcement, Yakabuski said the Ford government heard that the cost of equipment is a barrier to investing in the sector and also that forestry companies wanted support for research and innovation.

Under the previous program, a project had to be at least $5 million in size to qualify for funding.

“This opens it up to a lot of smaller businesses and entrepreneurs and producers,” Yakabuski said.

Additionally, where the Forestry Growth Fund took 10 to 11 months to turnaround applications, Yakabuski says applications can now be dealt with in three to four months.

“If you don’t have modern equipment, it’s going to be harder to be productive, harder to be competitive and we recognize that’s a huge part of this industry,” he said.

“To be competitive you have to produce your product in the most efficient way.” 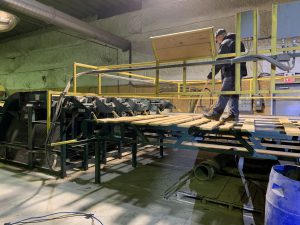 A worker at Quality Hardwoods in Powassan. (Rocco Frangione, MyWestNipisisngNow.com)

Yakabuski says the way FSIIP works is a company can apply for up to 30 percent of the total project cost.

The money approved under the application is a loan.

However, Yakabuski adds half of the loan is forgivable if during the process the applicant is able to meet certain requirements laid out in the contract terms.

Asked why he chose Quality Hardwoods as the site to announce FSIIP, Yakabuski said it’s a company that’s been around for almost 40 years and has seen the ups and downs of the industry during those decades.

“It’s shown it’s committed to a community and the industry,” he said.

“And it’s shown it can be successful even in challenging times.  These are the kinds of businesses that are the backbone of the economy.