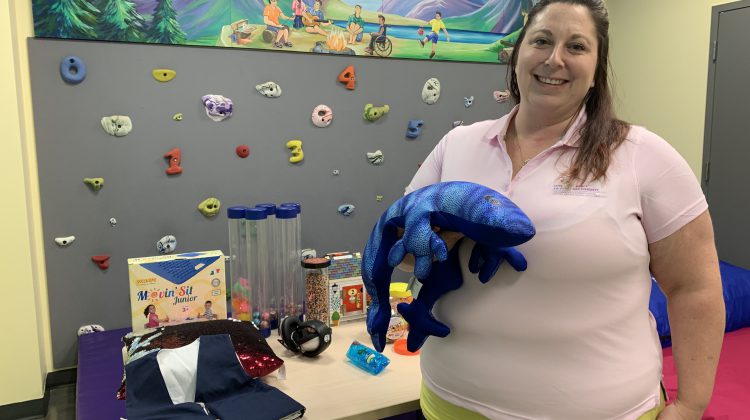 It’s been 10 years since the One Kids Place Treatment Centre opened its North Bay building.

The facility serves children age 0 to 18, and up to 21 if they’re still in school.

In addition to treating children in Nipissing District, it also sees children from Muskoka District and Parry Sound District.

OKP treats children with special needs like autism, cerebral palsy and Rett Syndrome, a disorder that can cause problems with language and coordination.

The clinic helps children who are non-verbal or their speech is not functional.

Marshall says the clinic uses both low and high tech means to help the child with his or her communication skills.

An example of the high tech devices is a laptop with a series of pictures and words on a screen.

It’s called Eye Gaze and it’s equipped with a camera that follows the child’s eye movements and is able to circle the image on the screen the child is looking at.

Marshall says with time the children come to understand what the symbols mean and are able to use the words in a context that makes sense.

The Smile Zone is another section at OKP and Therapy Assistant Alyssa Leferriere says this is where occupational and physical therapy are carried out.

Laferriere says treatment here is something as simple as teaching a child how to hold a pencil or scissors.

“This lets them function like other children in the classroom,” Laferriere says.

The child either wears a vest or has a frog-like weighted toy put on their lap.

Laferriere says that little bit of pressure helps the child focus more so they’re able to pay more attention to what’s going on around them.

Then there’s the multi-sensory room an area in OKP where Occupational Therapist Jeff Lawson says controls how much stimuli a child receives.

The various devices, which include a comfortable vibrating chair that is plugged into soft music, either helps them unwind or helps energize them more depending on the person. 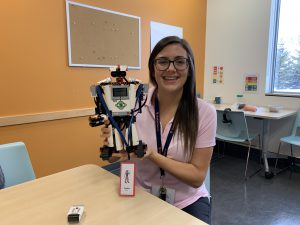 This is where someone like Joanna Stitt, a Behavioural Analyst enters the picture.

Her department is equipped with various devices including robots.

One such robot is named Frankie where the children either work in teams or individually and put him together and then operate the robot so it performs different missions.

When taken apart, the robot can also be assembled into different creatures including a scorpion and snake.

The provincial government pays for the core services at OKP.

But Aira Chapman, the Program Manager for OKP’s Huntsville and Parry Sound Offices, says the various pieces of equipment the facility owns are bought or acquired through fundraising efforts.

Strang notes that one of the biggest fundraisers is the annual Golf For Kids which raises money for the Loan Equipment program.

This is a program that has more than 1,500 pieces of equipment like chairs and walkers that parents can borrow to see how their kids adapt to them.

“Often kids are particular about the walker they want whether it be the colour or wheel size,” Strang said.

“So they come to our program, use the walker for a week, make sure they really like it before it’s something they invest in for their family.”

One Kids Place has had more than 400,000 client visits since opening its doors in September 2009.

The facility celebrated the milestone with an open house on Thursday.