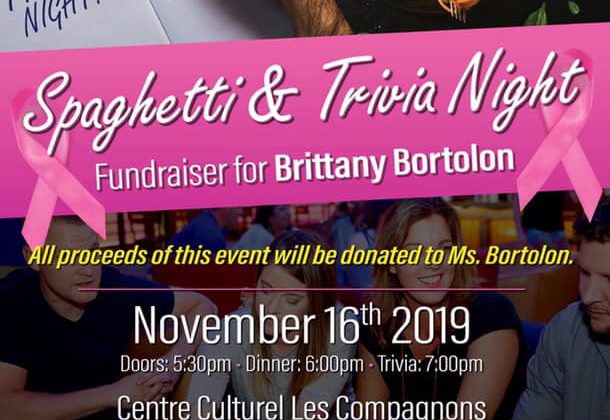 Girls with a Cause is back with another fundraiser.

On November 16 the organization will host a spaghetti dinner and trivia night at Les Compagnon in North Bay. The fundraiser is in support of local video journalist Britt Bortolon’s fight against breast cancer.

Doors to the hall open at 5:30 pm, with dinner being served at 6:00 pm. The trivia will begin after dinner, at 7:00 pm. A team of five will cost $100 to enter, and according to Girls with a Cause, pre-registration is encouraged.

Another local reporter, and captain of team #BrittsBevy, Clarke Heipel will shave his head in support of Bortolon before the trivia begins.

Girls with a Cause says that all proceeds from the fundraiser will go directly to Bortolon, and she will also likely to be in attendance.

Girls with a Cause was started by two women in the North Bay area to bring great craft shows to the area, as well as helping local charities. They say their goal is to put a smile on peoples’ faces.