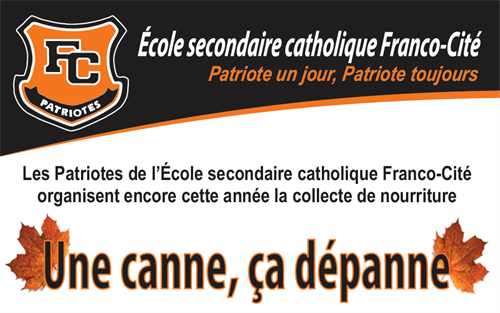 Une canne du depanne, or a can to lend a hand, is an initiative by the Franco Nord school board and the neighbouring four French Catholic Elementary Schools.

The initiative is to benefit the West Nipissing Food Bank.

“It is one of West Nipissing’s largest and most well-known annual Food Drives,” Jacqueline Levesque, the Marketing and Communications Officer for Franco Nord said. “The goal of this project is to really stock the West Nipissing Food Bank in order to support families in need as no one should go hungry.”

Students will be knocking on doors this evening between 4:00pm and 8:00pm looking for donations, but that’s not the only thing students will be doing.

“At 12:30pm on Thursday, the community is invited to join a human chain and parade in the streets. There will also be a pink football game at Franco Cite field starting at 1:30pm in support of cancer awareness,” explained Levesque.

If you won’t be home when the students are knocking, or around for the parade and football games, according to Levesque, you can still contribute.

“We encourage members of the community to bring their non-perishable food items to Franco Cite on Wednesday night before 8:00pm or drop off their donation to the school before 9:00am Thursday morning,” Levesque said. “After this time, we ask that you drop off your food directly to the West Nipissing Food Bank.”