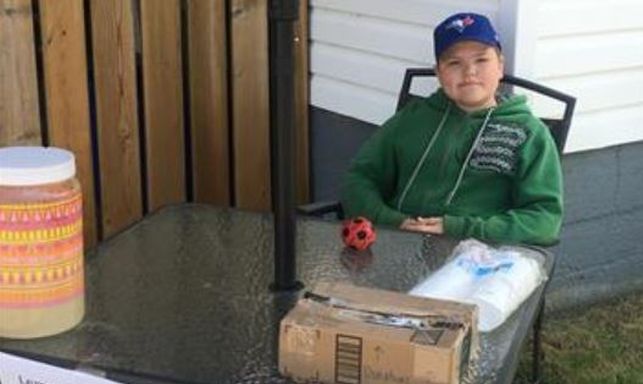 Alex Hebert has set a lifetime goal to raise $14,000 for Cancer research with the annual Terry Fox Run.

“Every year we keep on going higher. This is my last school run, but I think I will still be doing it in North Bay,” the determined Hebert said.

His first Terry Fox run was at the age of 7 months, when his mother Marci Becking pushed him in a stroller. This year, his 14th run is in honour of his Uncle Mike St. Amour, who is currently battling cancer.

“When I took him up to the desk in his stroller at seven months old, we went up to the volunteers at the desk to hand them the form,” Marci explained. “They thought it was for me and I said ‘no, it’s for this guy, he raised it.’ I really wanted to instill in my child that community participation was important and growing up knowing about Terry Fox and his courage and what he went through.”

The Student of Whitewoods Public School has certainly taken those lessons and run with it. He has $800 raised for this year’s run which takes place on September 27. This year the run was pushed back due to the IPM.

“My school hosts a yearly Terry Fox run,” Hebert said. “I like doing it. I know how I am helping, it’s not like I don’t know where it all goes.”

He has collected the money thus far from friends and family, along with a lemonade stand Alex ran in June.

“I also go around door to door and ask for donations. They’re usually pretty supportive.”

If you don’t see Alex coming to your door but still want to help him reach his goals, you can go to Alex’s Terry Fox page.

$14,000 is definitely a great goal to reach, but after this year the sky is the limit for Alex.