Canadore looks to the future, secures funding for seniors program 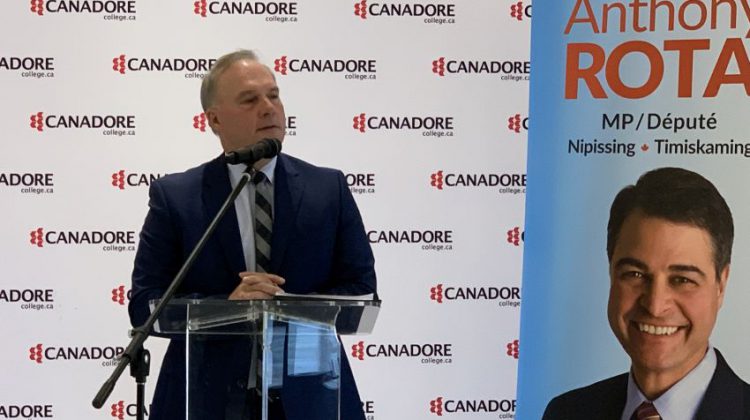 The Village at Canadore College continues to expand, even more so after the announcement of $1.99 million through the New Horizons for Seniors Program.

The announcement will help, through the college, a program that fosters social inclusion for seniors.

“The importance of this announcement allows Canadore to work with other organizations and develop programing for seniors right across Northern Ontario,” Nipissing-Timiskaming MP Anthony Rota said after the announcement. “It was competed for quite extensively right across the country. Canadore should be very proud for having qualified and having got it.”

In order for Canadore to receive the funding, the College had to make a proposal, which was made through the Village.

“This is great news for Canadore,” President of Canadore, George Burton stated. “This is an inclusive project. We are calling upon existing organizations that deal with seniors across the region and bring them together to work on a common idea which is to reduce the isolation of seniors and keep them engaged. We are going to be the holder of the project, but this is going to benefit everyone within this region and this riding.”

Isolation can be a silent yet scary thing as time moves on. For seniors, the social network diminishes as people pass on or move. It can be tough to re-establish those networks, and the goal of the project is to help seniors re-engage and remain well into their later years and to share their experiences.

“We’re all aging and by 2031 a large part of our population will be seniors,” Rota added. “The important part is to keep them active and keep them involved. It will also allow Canadians to benefit from the knowledge they have accumulated.”

Another benefit is that the students at Canadore will be integrated, in some cases, with the seniors.

“There is an engagement with our students to formally engage with seniors,” Burton explained. “If you think of it from a mentoring perspective, what a great opportunity to interact with someone who has a few more years under their belt.”