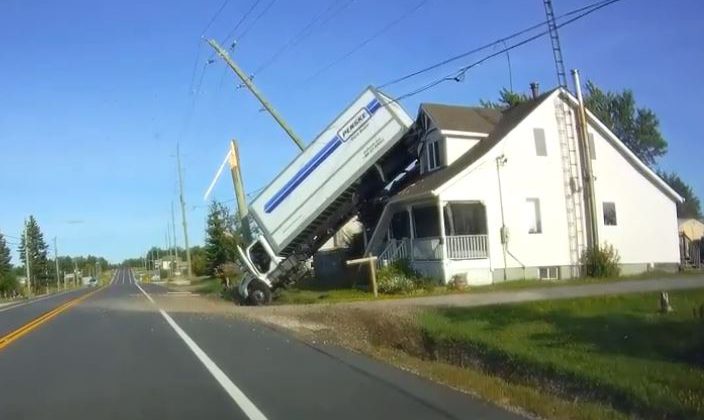 The OPP has charged the driver in this incident with careless driving. (Sharon Gauthier, Facebook)

By now, hundreds of thousands of viewers have seen the footage of a moving truck flipping onto its nose and coming to rest on the upper floor of a house in Alban, Ontario.

The videos and photos of the odd incident have gone viral since the incident on Monday.

Monday at approximately 5:15pm, members of the Nipissing West OPP and the French River Fire Department responded to a single-vehicle collision on Highway 64.

The investigation (and video) revealed the eastbound commercial motor vehicle drove off the roadway into a driveway culvert and then struck a hydro pole which caused the back of the vehicle to lift up and land on the roof of a house.

There was nobody inside the house at the time. Both occupants in the commercial vehicle were not injured.

As a result of the police investigation, the 24-year-old male driver, from Scarborough, Ontario was charged with careless driving.