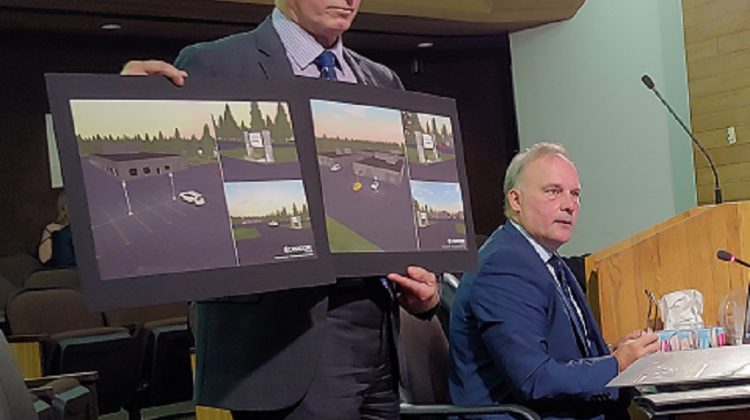 An “Innovation Park” beckons and brings with it the promise of “370 jobs, conservatively,” with more to follow in the coming years, thanks to “organic growth.”

This from Canadore College President and CEO George Burton, who said the school and its partners will follow all regulations and requirements but he has five companies signed on and ready to fill spaces in such a facility.

The proposed development off Cedar Heights Road is a perfect fit for the school and its private industry investors, according to Burton. The narrow, mile-long strip of land running north and south parallel to Larocque Road would be built in a “condo-style” arrangement, says Burton, with partitioned workspaces, such as laboratories, research facilities, and a movie studio. All within walking distance to the college’s main campus and removed enough from the city to provide the lower vibrations necessary for the research work planned for the facility.

Paul Goodridge, an Ontario land surveyor, addressed North Bay City Council at a special committee meeting last evening on behalf of the project and also fielded questions from around the table. The matter at hand at the special meeting was a rezoning from its current residential designation to a type of industrial classification with various uses, including for a post-secondary institution.

Citizen Peter Handley, a nearby resident to the proposed site, had raised concerns about the fall-out if one of the proponents (including Candore) had a change of heart and pulled out of the deal. He wondered whether that swath of land off Cedar Heights would remain rezoned as industrial. Nevertheless, Handley’s questions were answered and he seemed content. Handley did warn, however, the Council should include strict language that the development proceeds only with an “educational component,” not as pure industry.

Following the meeting, Burton gave a glimpse of his vision for the project. Besides the movie studio and pharmaceutical aspect, the Innovation Park would include a testing facility for lighting and an agricultural area for “grow pods,” what Burton termed as “zero carbon emission,” agriculture. A packaging company would also take residence at the facility to package the pharmaceuticals and agricultural output.

Burton said these are all collaborations with companies that have been in the works for the last year or so, although the concept has been in the planning stages for much longer. He said the five companies eager to see this development move past the rezoning stage and into construction all have a research component consistent with Canadore College programming.

The community services committee moved the rezoning file to the council for a vote. Still to be decided is whether a holding zone designation attached by the City’s planning department will remain in place until its questions about the proposal are answered satisfactorily. Goodridge expressed a desire for Council to remove the designation so the project can proceed under site plan control and without further delay.