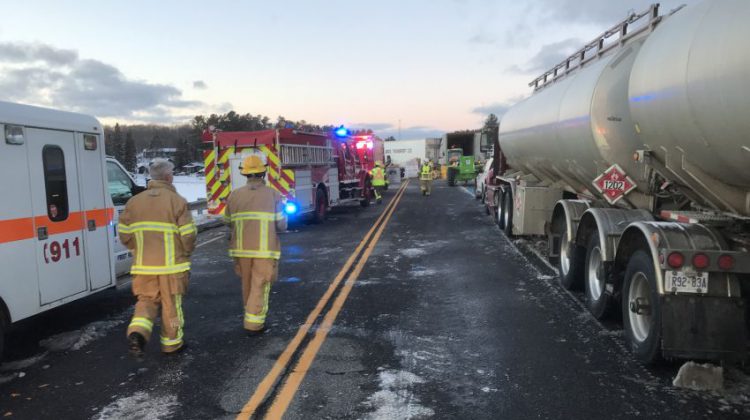 A NBFES Haz-Mat team played a key role at the scene of this collision and spill on the Key River bridge north of Parry Sound last December. (Supplied by NBFES)

In the case of a chemical, biological, radiological, nuclear or explosive emergency, North Bay Fire and Emergency Services will have the area (and a large part of the province) covered.

Authorized by a vote of North Bay City Council, the local fire department and the provincial government have entered into a memorandum of understanding to operate a Technician Level Chemical, Biological, Radiological, Nuclear and Explosive Team (CBRNE).

Whiteley says the NBFES has eight technician level firefighters and 10 mission-specific members. The higher level of service Whiteley is referring to will come from new (and maintained) equipment, the cost covered by the province.

The Fire Chief also shares new hires recruited to replace retiring NBFES personnel will automatically be trained to technician level, increasing the expertise of the department and service level to the community.

In a report to council on the matter, Whiteley writes, “The provincial fire service response strategy involves three levels of response: Awareness, Operations and Technician. The majority of fire departments in the province operate at the Awareness Level. In 2003, the City of North Bay entered into a Memorandum of Understanding between the Province and North Bay Fire and Emergency Services that provided a cache of hazardous material equipment and allowed NBFES personnel to be trained to the Operations Level and become a member department of the CBRNE response team provided through the Provincial Mutual Aid Plan.”

According to Whiteley, there are no direct budget and financial impacts to the City of North Bay. All costs incurred for training and equipment will be funded by the Ontario Grant Program, up to a maximum of $150,000 annually.

“We wanted to make this truly cost-neutral to the municipality. So, when we first started out, all the equipment was given to the City, which is a lot of money,” points out Whiteley. “But, since then, maintaining the training the overtime for training, all that’s been borne by the City.”

He adds all costs are covered by the province when the team is sent to handle a situation away from their base, such as with last fall’s tractor-trailer incident on the Key River bridge.

Whiteley’s report states “the goal of the response strategy is to ensure a competent, multi-disciplinary team is available on a province-wide basis to respond to large-scale and/or complex natural or human-caused emergencies in a planned, coordinated and timely manner.

“This upgraded training and equipment are of benefit to the residents of the City of North Bay on an ongoing basis to respond to all types of hazardous materials incidents.”