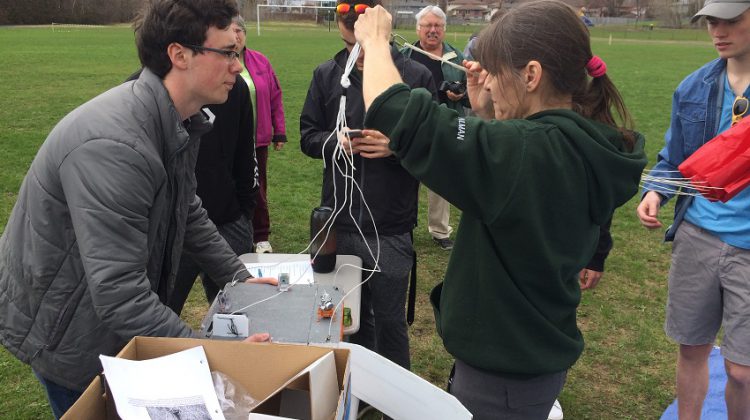 Their teacher Kelly Shulman says this launch went off a lot smoother than the one last fall.

“The weather was better, there was no wind,” Shulman said.

Last fall’s launch took place in snowy conditions and a strong wind that caused the weather balloon to sway a great deal as it rose 30 kilometres into the sky.

This time the weather balloon included a weather vane that pointed into the wind and kept the balloon from swaying.

Shulman says at almost four months, there was more time to work on this project than the fall one because at the time she was trying to get the launch in before winter arrived.

The payload for this weather balloon was a bit different.

New was some solar panels on the top and side to see where it’s best to place the panels on future launches.

It’s those solar panels that will power future flights.

“The data will tell us where we got the most wattage out of the panels,” she said.

The weather balloon is filled with helium but Shulman says in the future the class may switch to hydrogen because of the rising cost of helium.

Shulman says this launch cost about $1,300 and most of that was to pay for the helium, which cost just more than $1,000.

The balloon rises at about 4.6 metres to 4.7 metres per second.

At about 30 kilometres it pops because, with little air pressure on the outside, the balloon begins expanding compromising its elasticity resulting in it breaking apart.

At that point, the payload starts falling back to earth very quickly.

However, as the air pressure begins to increase that deploys the onboard parachute and the descent is slowed to about 5 metres a second.

The payload was expected to land somewhere in the Powassan-Nipissing area about five kilometres off Highway 11.

An audio beacon allows the school to locate and retrieve the payload.

Shulman expects the weather balloon launch to become an annual spring affair to avoid the fall incident of an early onset of winter.