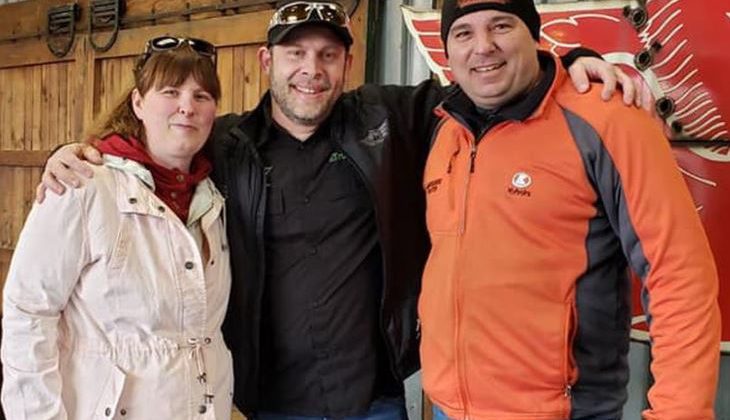 Nicole Blais (left) and Jody Blais (far right) in an undated photo from Facebook have been found deceased.

The search for a missing northern Ontario couple has ended in tragedy.

The OPP says their Emergency Response Team is at the scene of the wreckage of the helicopter and the bodies of 47-year-old Nicole and 49-year-old Jody Blais, both deceased, have been recovered.

Captain Marty Zimmer of 8 Wing Trenton says the crash site was spotted at about 1:15pm yesterday by a C-130 Hercules airplane.

Zimmer says, “Following that, a Canadian Armed Forces Gryphon helicopter was dispatched to the site, where two search and rescue technicians were dispatched to look at the incident and they determined at that time that both occupants had not survived the impact.”

The wreckage of their helicopter was found 35 nautical miles from where they were expected to land last Monday night in Fauquier.

The OPP and the Transportation Safety Board will be investigating the circumstances leading to the crash. The OPP has been working collaboratively in the search efforts with the Joint Rescue Coordination Centre (JRCC), the Civil Air Search and Rescue Association (CASARA) and Timmins Porcupine Search and Rescue (TSPR).

Anyone with information that could assist the investigation is encouraged to contact the OPP at 1-888-310-1122.

With files from Nick Birnie and Bob McIntyre of Vista Radio