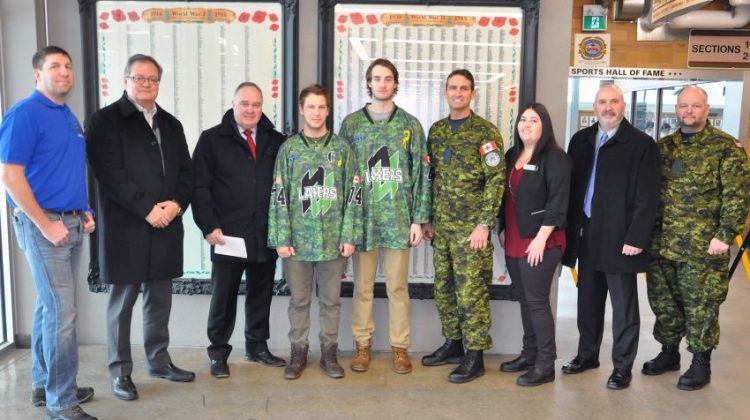 The annual celebration of North Bay’s and Canada’s Armed Forces, as well as the Canadian and United States Air Force, is scheduled for tomorrow night at 7:30pm at Memorial Gardens.

The annual game, which has always been against RMC, will see the Lakers don camouflage uniforms which will be auctioned off through a silent auction and presented to the winning bid post-game.

“We are really excited to once again host this game. It is our tenth Military Appreciation Night and is always a date we have circled on our calendar,” Lakers Athletic Director Vito Casitglione said at the event launch, Thursday. “Being able to not only entertain the women and men in uniform but also raise some money for the Military Family Resource Centre is truly a win-win and is something we are happy to be a part of.”

“This is always a fun night and a great game. RMC always works hard and gives us all we can handle,” Lakers men’s hockey team head coach Mike McParland said. “The ability to support and recognize the men and women of the armed forces, raise money for the MFRC and entertain the men and women in uniform is great and we look forward to it.”

“The North Bay Military Family Resource Centre (MFRC) is honoured to once again be the recipient of proceeds from the jersey auction at the Lakers Military Appreciation game. As a not for profit organization, receiving donations like this help us enhance programs and services to meet the unique needs of military and veteran families throughout Northeastern Ontario,” MFRC Executive Director Tessa Clermont said. “We’re incredibly grateful for the support, and we look forward to cheering on the Lakers at the game.”

“On behalf of the members of the Canadian Armed Forces and the United States Air Force here in North Bay, I would like to express my sincerest gratitude to the Nipissing University Lakers for hosting the Military Appreciation Night,” Colonel Mark Roberts, 22 Wing Commander, said. “This game is an excellent opportunity for military members and their families to relax, unwind, and enjoy some great local hockey, while also supporting the North Bay Military Family Resource Centre.”