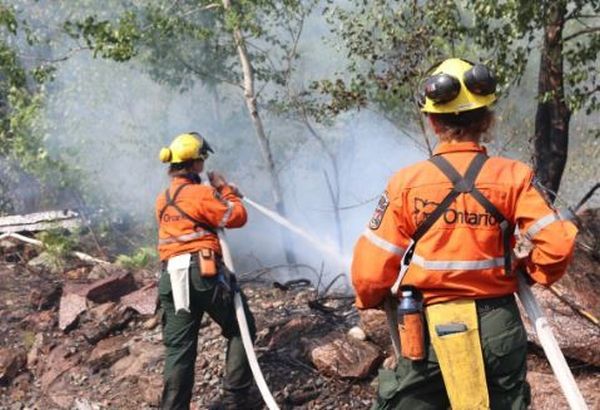 Forest fires in Ontario in 2018 are well above the 10-year average.

The Aviation Fire and Emergency Services (AFFES) arm of the MNRF says Ontario has had nearly 1,000 forest fires this year, compared to 354 last year, and nearly double the 10-year average of 567.

Officials say there are 49 active forest fires across the Northeast. Of these, 17 are not yet under control, 32 are either being held, under control or being observed.

There have been a few changes to report regarding North Bay Fire 72 or Parry Sound 33.

FireRangers from Ontario, Saskatchewan, Newfoundland and Labrador, and Mexico remain committed to this cluster, focusing primarily on North Bay Fire 72.

That fire is mapped at approximately 27,000 hectares and has not grown in size in the last 2 weeks.
Bucketing helicopters will be available and utilized as needed at North Bay 72.

The size of the Parry Sound fire remains constant at approximately 11,362 hectares and is being reported as “held.”

#ParrySound33 is being held at 11,362 ha. Thank-you to all the hard working fire crews, staff and emergency personnel who helped #Ontario fight this #forestfire. pic.twitter.com/SHsJJJHA9J

AFFES says there are 247 firefighters and support staff currently working on this incident. That number will continue to fluctuate with the state of the fire, as well as when staff complete their 14-day assignments and more staff become available after days of rest. Despite the fluctuation in staffing numbers, adequate staffing levels will be maintained for fire operations.

Most of Ontario to enter Stage 3 on Friday

Prime Minister Trudeau apologizes for not recusing himself from WE talks